With many features such as a new S6 processor, a U1 ultra-wideband chip, and blood oxygen monitoring. This watch attracts a lot of customers’ attention and creates huge money for Apple.

And now, many people are wondering whether Apple Watch Series 6 and Series 5, which one is better. This blog will help you find which is the best models for you to use. 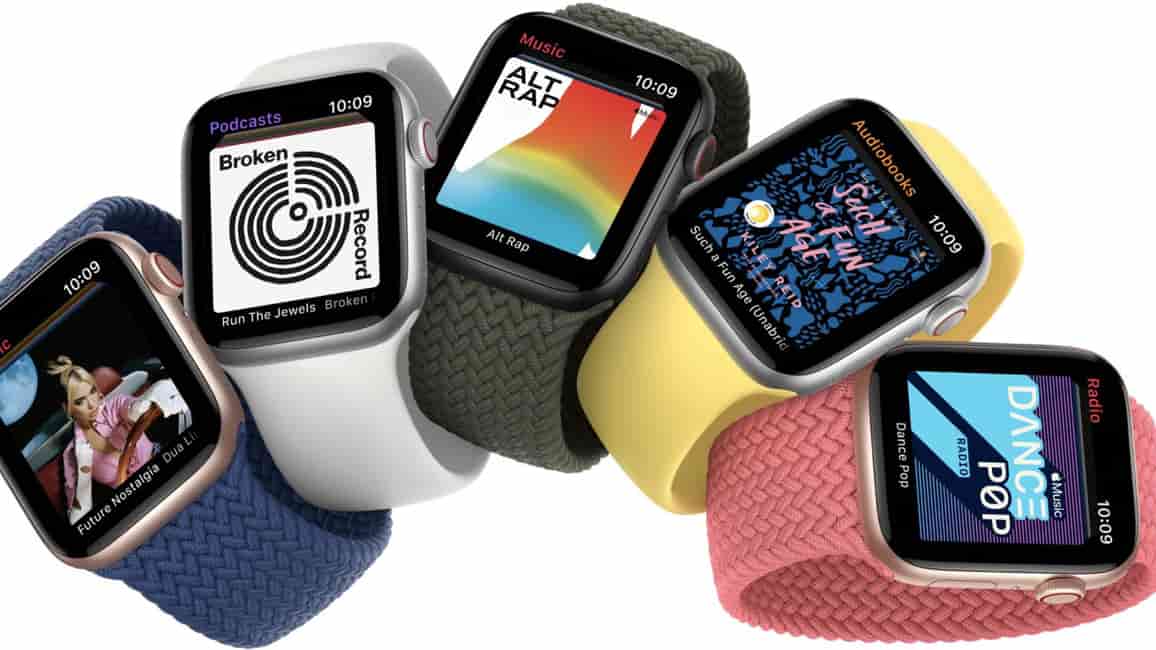 There are many new features that the Apple Watch Series 6 have. However, both of these models are using a retina OLED display. and they share similar the same feature at the maximum brightness of the display (about 1000 nits).

At a glance, the Apple Watch Series 6's always-on display will appear significantly brighter outside and during day-to-day use.

Aside from this distinction, the high-resolution Retina displays on both models are identical. Unless you require a crystal-clear view of your watch face at all times without raising your wrist, the Apple Watch Series 5's display will be more than adequate.

Both processors in the two models are 64-bit dual-core chips. However, the newer S6 processors are based on the A13 bionic which helps it run faster by 20% than the previous S5.

Series 5 with a dual-core processor is up to two times faster than Apple Watch Seris 3. However, the S5 was already a capable processor, and the S6 simply offers a more refined chip. If you want to use the fastest possible app launch speeds, I think this is not a good option to buy the Apple Series 6 because of minor performance improvements.

You can choose the Apple Watch Series 5's S5 processor will be sufficiently fast and efficient for the vast majority of users. With the ECG app in Apple Watch Series 6, users touch the Digital Crown and after 30 seconds, receive a heart rhythm classification.

It can determine whether the heart is beating normally or if there are signs of Atrial Fibrillation (AFib), a heart condition that can lead to serious health complications. All recordings, classifications, and symptoms are saved in the Health app as a PDF that can be shared with physicians. 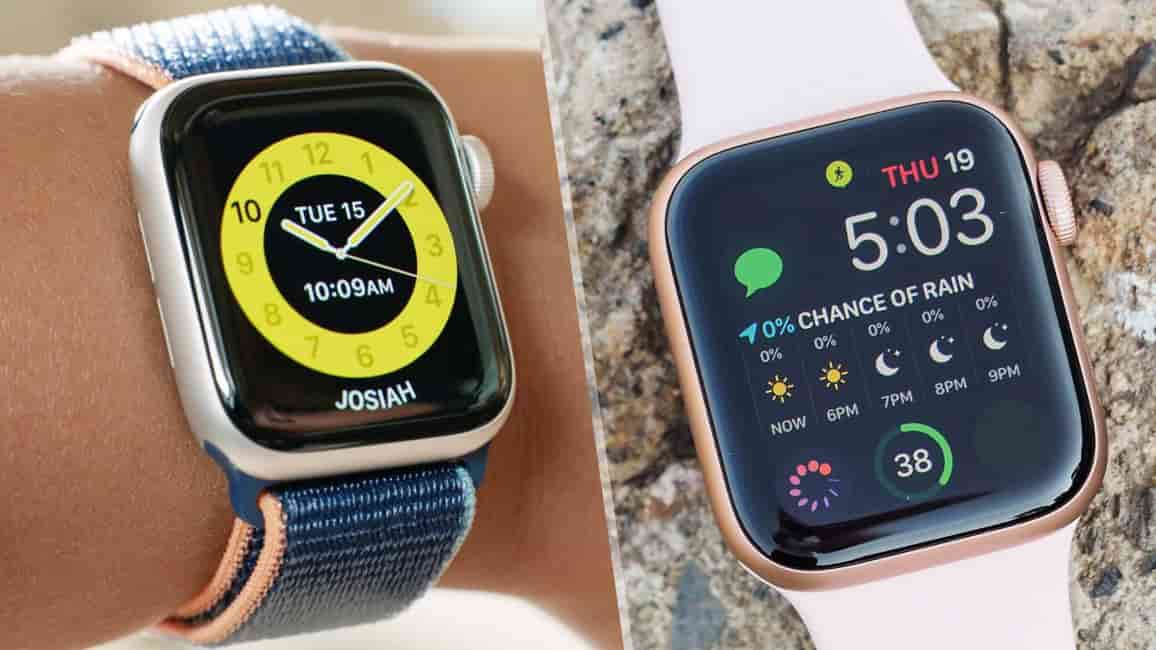 Despite the fact that Apple is increasingly using the chip in its new devices, it has yet to unlock significant new features. So far, Apple has only used the technology to power a directional AirDrop feature in iOS 13, but it has hinted at more exciting future applications. This suggests that the functionality of the U1 on the Apple Watch Series 6 may be expanded.

If you intend to keep your Apple Watch for a long time, the U1 chip will likely make it a much more future-proof model, due to the possibility that more functionality will be added to it in the future.

The Series 6 has a blood oxygen sensor on its rear with an array of four clusters of green, red, and infrared LEDs. They measure light reflected back from blood and using an advanced custom algorithm, can determine blood oxygen saturation between 70 and 100 percent.

However, Series 5 have many similar features to the Apple Watch Series 6. They all have an electrical heart sensor to take electrocardiograms or ECGs. With the ECG app, users touch the Digital Crown and after 30 seconds, receive a heart rhythm classification.

Both models include an optical heart sensor that monitors heart rate and can alert you to high and low heart rates, as well as irregular heart rhythms. They can also send out an emergency SOS, detect falls, and monitor noise levels.

Both models of the Apple Watch retain what Apple calls an "all-day" battery life of around 18 hours.

According to Apple, both models can work for around 18 hours. If you want to have a device that charges fast, you can choose Apple Watch Series 6. It completes a full charge in under one and a half hours while it took under two and a half hours for Series 5 to do that.

Because the battery life of both models is nearly identical, it is unlikely that it is worth favoring the Series 6 solely on the basis of faster charging and slightly improved battery usage during specific activities. Instead, the Series 6's battery and charging improvements show how the device offers a variety of minor improvements over the Apple Watch Series 5.

Both models share the same design, but it have some different points such as materials and color options.

Apple Watches with stainless steel, titanium, or ceramic, use a sapphire crystal screen, whereas the aluminum models use Ion-X strengthened glass. 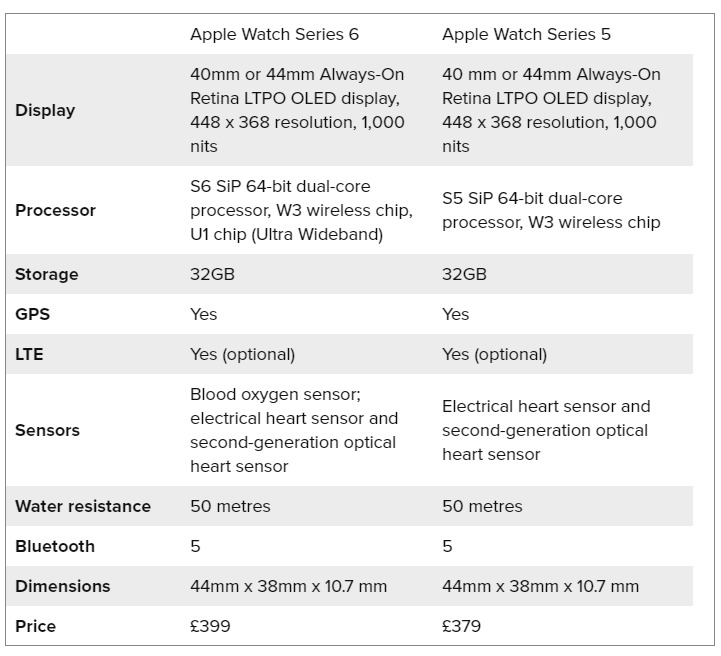 However, if you do not care much about the new features, you can use the Apple Watch Series 5. The Apple Watch Series 5 is still a viable option. It has many of the same features as the newer model, such as the ability to take ECGs. However, keep in mind that the Series 5 is already more than two years old and will most likely not support software updates for as long as the Series 6.

If the Apple Watch Series 6 is out of your price range, you should consider the older Series 5.

Read more: iPhone 13 Review: Not The Best But Practical!!

iPhone 11 Review: One Of The Best iPhone Ever Still After 2-year Release